From getting success at Nike to launching his own beverage, Travis Scott has been doing great. However, he is an artist first who has his Cactus Jack record label and is expanding it by adding new talent.

The American rapper has signed the famous 19-year-old Tiktoker Malu Trevejo to his record label and added her to his Cactus Jack roster. The label includes artists such as Sheck Wes, Don Toliver, and many more.

The Cuban-born singer, who performs in Spanish and English, has gathered a massive following on social media with over 10 million Instagram followers, and also she keeps posting her dancing clips on TikTok. 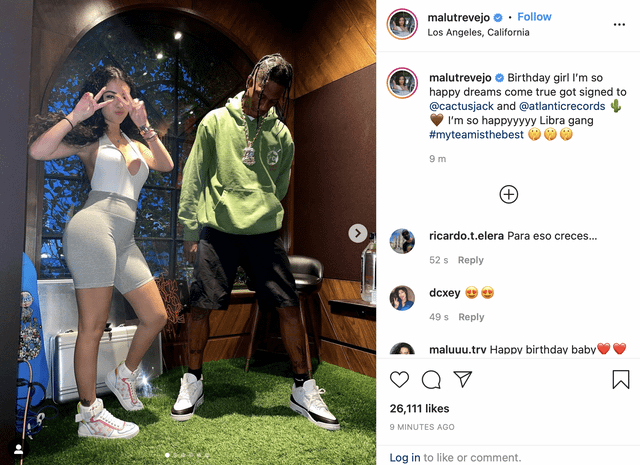 Trevejo shared a post on her Instagram, where she announced the career move and was more than excited to be a part of the Catcus Jack family.

She captioned that removed Instagram post, “Birthday girl I’m so happy dreams come true got signed to @cactusjack and @atlanticrecords,” she wrote. “I’m so happyyyyy Libra gang.” Till now, it’s not fully sure that will she release an album or if she’ll be modeling for La Flame’s clothing line.

Posted by Aniket Macwan - August 16, 2021 0
There is no doubt that Drake will go down in history as one of the most successful artists as he…

Posted by Vinay Patel - January 2, 2021 0
Travis Scott has been spotted around Aspen as the 28-year-old rapper joins the Kardashian-Jenner clan to celebrate the new year.…

Posted by Aniket Macwan - September 21, 2021 0
DJ Khaled and rapper Drake have always been great friends, and now that Drake’s new album CLB has been a…

Posted by Aniket Macwan - September 3, 2021 0
Trinidadian-born rapper Nicki Minaj’s son speaks for the first time in a cute video she posted on her Instagram story,…

Travis Scott Teases His Next Air Jordan 6 Collab On IG

Posted by Aniket Macwan - March 5, 2021 0
The Houston rapper, Travis Scott has finally revealed his upcoming collaboration with Air Jordan, after months of speculation. A few…