After moving to India with boyfriend Sumit Singh, Jenny Slatten has been dealing with a lot of issues. Now, she even has to deal with her soon-to-be mother-in-law daily as she teaches her how to be an Indian daughter-in-law.

In Us Weekly’s exclusive sneak peek from Sunday’s episode of 90 Day Fiancé: The Other Way, Sumit and Jenny bring his parents, Anil and Sahna to give a tour of their house.

In the clip, Sumit’s mom asks the pair to show her their house, and Jenny seems happy to oblige. The house tour started from their kitchen, the United States star says, “This is where all the cooking happens.”

However, when the parents look around the kitchen and the way everything is kept, his mom could not resist sharing some tips on how to organize the kitchen. Sahna says, “Oh! There are shelves, you shouldn’t keep all of this here. Everything should be kept in its own spot.”

Sahna added, “All the dishes you cleaned, put them away as you clean them.” Then she pointed out at the floor and says, “Jenny look how dirty this is, you don’t clean here?” She makes Jenny grab a broom and clean all the dirt right away.

However, during a confessional, the TLC star explains, “She’s going through my kitchen and finding every single thing wrong, checking every single corner, moving my stuff around, making me clean and sweep. Well, God damn, if this isn’t going the exact way I knew it would, I’m just pissed. It’s my kitchen.”

“Cleaning and maintain the entire house is our daily job. But there is an age for learning, Jenny has passed that also. She won’t be able to do anything,” Sahna says in her confessional.

Later Sumit revealed, “I am happy to see the way the house is getting cleaned. I’m not saying Jenny don’t do a good job, but my mom is asking her to do better than whatever she’s doing. So, I like it.”

In the end, his mom says, “Jenny, you have to do all of this daily.” Later, Slatten says, “Sumit’s mom is trying to make me feel bad, she is trying to make me look bad. And she just trying to find reasons to say, Jenny is not good enough for my son. I just feel like this is going to ruin our relationship and i wish they would just leave now.“

’90 Day Fiance’: Loren Brovarnik Claps Back At Trolls Who Claim That Her Son Has Down Syndrome

Posted by Aniket Macwan - July 5, 2021 0
The 90 Day Fiance stars Loren and Alexei Brovarnik have always been the fan’s favorite pair from the show. But it seems…

’90 Day Fiance’: Jenny Was Married To This Man Before Meeting Sumit

Posted by Aniket Macwan - November 30, 2020 0
90 Day Fiance: The Other Way‘s Jenny Slatten was married for fifteen years before she was catfished by Michael Jones,…

Posted by Aniket Macwan - November 14, 2021 0
The 90 Day Fiance star Sumit Singh has been associated with the word “scammer”, as fans claim that he has scammed… 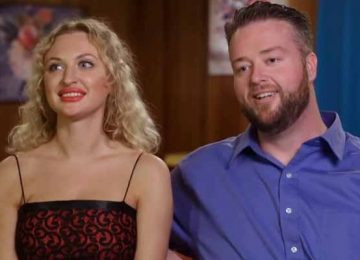